Burma Back at the Crossroads 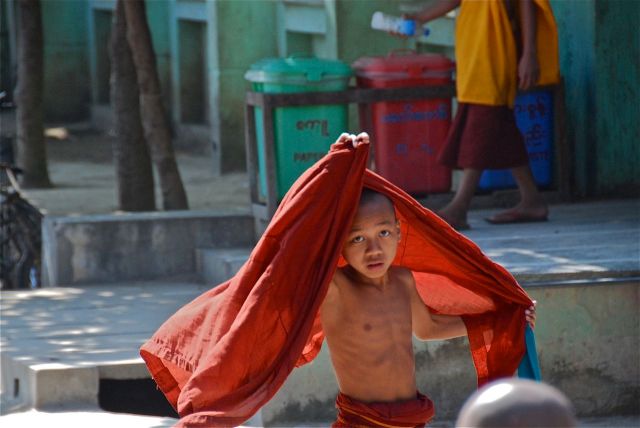 At the Asia-Pacific summit in Indonesia last week, U.S. President Barack Obama said he had spoken with iconic Burmese democracy leader Aung San Suu Kyi, who supports increased engagement with Burma/Myanmar. Seeing “flickers of progress” in a country mired in a military dictatorship for fifty years, Obama is sending Secretary of State Hillary Clinton to meet with Burma’s quasi-civilian government and Aung San Suu Kyi in early December. On Friday Suu Kyi’s party, the National League for Democracy, re-registered to enter parliamentary by-elections, with a strong likelihood that Daw Suu will herself stand as a candidate for one of the seats.

As Burmese political prisoners, including monks, are beginning to be released, media censorship is relaxed, and civil society emerges from the shadows, President Obama said such signs were “the most important steps toward reform in Burma that we’ve seen in years.”

Just days ago I returned from Burma where I saw for myself how things are changing. I flew into Yangon on November 2 with Jill Jameson of Australia, both of us coming from the International Network of Engaged Buddhists conference in Bodhgaya. At INEB we were able to meet with Burmese monks and activists, and develop a plan for our time in Burma, so we had plenty to see and do.

As our plane rolled across the tarmac towards the Yangon International terminal, it was clear that basic realities in Burma were altered from my last visit in 2009.  There were eight planes on the ground, where previously there were none.  The terminal itself was bustling with (mostly) European tourists. Taxis and shuttles crowded the curb outside.

Yangon’s main streets had been repaved and mysteriously the cars looked more up-to-date, except for the usual hole-in-the-floor 1970s taxis and smoke-belching buses.  There were more shops, more people in them, and more looming construction sites — concrete towers that look old and discolored before they are even complete.

But these were superficial signs. The remarkable thing is the kind of discussions and work we could share with friends in Yangon, Mandalay, and Shan state.  We met with monks, educators, activists, former political prisoners, and Western diplomats.  Everyone had the same perception: right now there are possibilities for change, for civil society and community development, that had not been available even three months ago.  No one was wasting any time getting down to work. Could we help?

Two compelling questions arise: 1. What are the causes and conditions behind these societal changes; and 2. How reliable or enduring will these changes be?  In response to the second question, the answer seems to be: we just don’t know.  As President Obama said, we are seeing “flickers of progress,” and flickers do not always become a flame.  Sometimes they are no more than momentary sparks.  Many people we met in Burma are guardedly optimistic.  But even guarded optimism is remarkable in a country where any kind of optimism is as rare as a white elephant. At any moment the junta’s senescent generals could roll back the reforms and intervene with fresh violence. Remember, too, that there are still almost 2000 documented political prisoners, and active armed conflict in northern Kachin state and in other ethnic regions.

The matter of causes and conditions is complex, with a variety of internal and external aspects.  I heard one informed person say that members of the military and others in government were disgusted with Burma’s pariah status, ashamed of the Saffron Revolution repression and killing of monks in this deeply Buddhist nation, and embarrassed by the government’s non-response to Cyclone Nargis in 2008, which left more 100,000 dead and countless Burmese displaced.  Externally, Burma is wedged between two regional superpowers — China and India — where a new “great game” is playing out over its natural resources and strategic resources. Chinese investments in Burma are extensive and growing.  The new civilian government sees Western investment as a necessary alternative to Chinese economic hegemony.  The only way to bring in U.S. and European investment is to eliminate long-standing sanctions against Burma by way of social and political liberalization.  The United States might have its own reason for opening its hand to Burma: containment of Chinese influence in Southeast Asia. Although, of course, the U.S. State Department is reluctant admit to such geopolitics.

Burma is a large and beautiful nation of many cultures. Its peoples are generous, kind, industrious, and curious about the world.  They are also shadowed by fifty years of repression and civil war.  Wounds and traumas run deep.  So does hope.  Time will tell which way they turn.  We ought to be there when the curtains of fear come down.

This piece was also posted at ShambhalaSunSpace

4 Responses to Burma Back at the Crossroads