INEB in Bodhgaya: Journey to the West —1

INEB Conference, Bodhgaya, )ct. 2011Actually I am editing this piece two weeks later, back in Berkeley, dealing with jetlag. — Alan

This year’s International Network of Engaged Buddhist (INEB) conference — The Future of Buddhism: From Personal Awakening to Global Transformation — ended two days ago, and I write this in flight from Calcutta to Bangkok, on the way to Burma.

Our meeting in Bodhgaya, seat of the Buddha’s enlightenment 2600 years ago, took place in full-tilt India, in Bihar — arguably the poorest corner of the country. The Bodhi Tree and the ancient Mahabodhi stupa were just around the corner. I walked there each day, meditating and circumambulating the stupa along with thousands of devout pilgrims, prostrating Tibetan monks, amplified pujafiers, and armed guards. A spiritual circus, just for us Buddhists.  At the temple gates hawkers tenaciously touted dried Bodhi leaves, CDs of chants, cloths imprinted with the genuine footsteps of Buddha, and so on.

Outside the gates clusters of begging children, with the beseeching eyes and outstretched hands so familiar from late night evangelical television infomercials, smiled and literally pulled at clothing until you surrendered a rupee to each member of the gang.

I kept trying to muster a proper sense of religious devotion, pulling back the curtains of time to see the Buddha sitting in determined ease underneath the tree. No sound systems, no haze of exhaust.  My powers of imagination fell far short of the mark. Which is not to say I was less than grateful to be there.

But the INEB conference was excellent. It was  larger than I had imagined, more than three hundred from, let’s see, India, Sri Lanka, Bangladesh, Burma, Thailand, Cambodia, Laos, China, Taiwan, Malaysia, Indonesia, Japan, Korea, Tibet, Bhutan, Ladakh, Singapore, Australia, the U.S., and Europe. Among these were many old friends, including a large delegation of young Dalit Buddhists from Nagaloka, the school I have been teaching at in Nagpur, India. 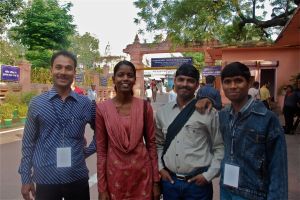 The program itself was full, with long plenary sessions in the morning on the future of Buddhism, and small topical workshops each afternoon. Evenings were relatively free, but all spare time — evenings and mealtimes — filled with informal meetings for planning and networking.  With no disrespect for the formal part of the program, but these informal gathering were where the real work tended to happen.

It was wonderful to see our young Indian Buddhist activist emerging as leaders. There was also a large contingent of Burmese — educators, activists, trainers, and monks — many of whom I will see in Burma over the next ten days there.  Most encouraging is word that the political ground is shifting after so many years of total lockdown. There is some room to maneuver and to meet. So, by coincidence Jill Jameson and I are going at just the right time. I will have more to say about Burma in the next few entries.

Just to say, I had very limited access to news or the Internet since I left home on the 23rd.  The police attack and clearing of Occupy Oakland did is no surprise. A bold experiment was summarily repressed.  It was not always a comfortable place to be, to listen, to meditate, but I rejoiced to see a real social experiment wholeheartedly embraced and sustained. May it rise again and may many other sites around the country flourish.  Many years have passed since I could unblushingly say “power to the people,” but now is the time.